The proponents of Dynamic Systems Theory advocate that there is no central governor pressing an ‘pitch the baseball’ button in the brain. The believe that movements self-organize as a result of the boundaries or constraints placed on the system; the task, environment, or organism. It follows that no two contexts will ever be exactly the same, and therefore no two movements will ever be executed the exact same way either.

When the nervous system is asked to perform a novel task, for example learning to throw a baseball with your non-dominant hand, it has no ‘throw’ program or pattern available to perform said movement. There are numerous studies in the literature that show novices search for and display a number of variant movement strategies while learning a novel task.

As the task is continuously practiced certain components of the movement become stable, consistent and repeatable (what are called attractor states) and a consistent pattern emerges.

This pattern, however, is composed of attractors states AND fluctuators. Thus allowing for it to be flexible enough to accommodate the dynamic nature of the constraints placed on the system. For example, transitioning the newly acquired skill of throwing the baseball on a flat ground to now throwing it off of a mound. 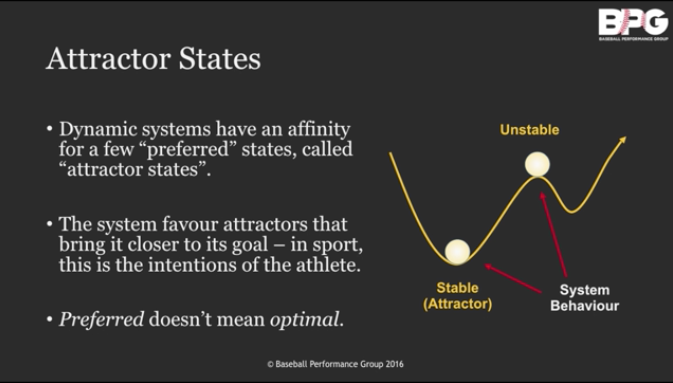 Essentially what this means, and how I see it fit into our performance model of care, is that we don’t come pre-programmed with movement patterns. When we ask a client or patient to perform a novel movement, for example teaching a novice to squat – the nervous system isn’t deploying a ‘squat program’. It will attempt a number of variant kinematic sequences to accomplish the goal and over a great number of attempts a flexible yet consistent pattern will emerge. This is the reason we want to have as many articular options as possible at our disposal.

We hope that this post clarifies a few points regarding movement patterns versus programs. We’ve had a lot of great feedback from our webinar on the application of Dynamic Systems Theory with baseball and we are attempting to expand on some of the finer points.

If you have specific questions please note them in the comments section and we will do our best to address them!