This blog post is a follow-up to Kinematic Differences Between Pitch Types: What We Know So Far, where we discussed previous literature investigating differences in pitching mechanics between pitch types. In this project, we aimed to replicate the findings in the studies synthesized in the previous post, and also investigate some differences further using PitchAi.

There were five pitchers who participated in this study. Average age was 23 ± 4 years old. Average height was 183.86cm ± 10cm, and average weight was 90.54kg ± 11.20kg.  All data was collected during normal bullpen sessions, and pitchers were not subject to any research interventions. Pitchers who were not comfortable throwing a type of offspeed pitch in this study did not throw that type of pitch.

All pitches were thrown from a rubber indoor mound to a target at the regulation distance of 60.5ft. The camera position was 4m from the middle of the mound, 0.9m down the mound, and on a tripod 1.1m tall. Videos were recorded on an iPhone 12 Pro at 240Hz and 1080p. 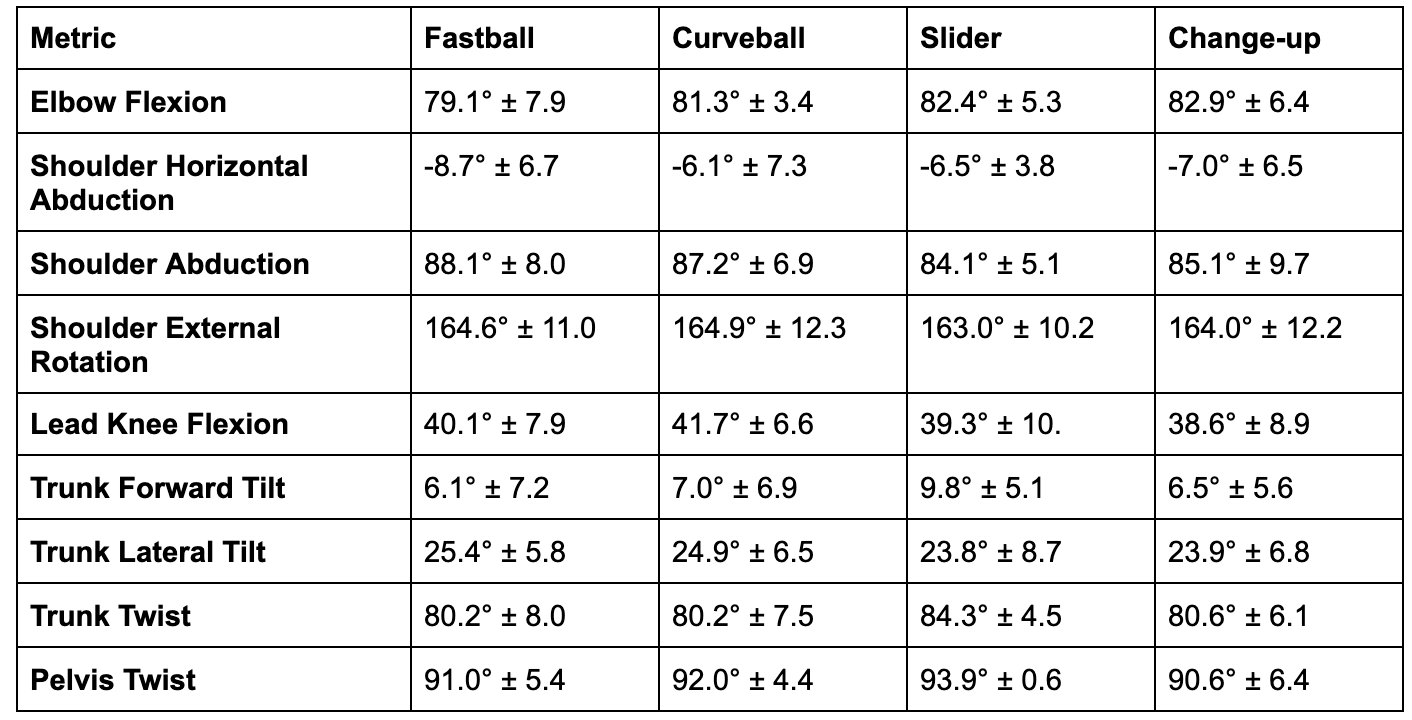 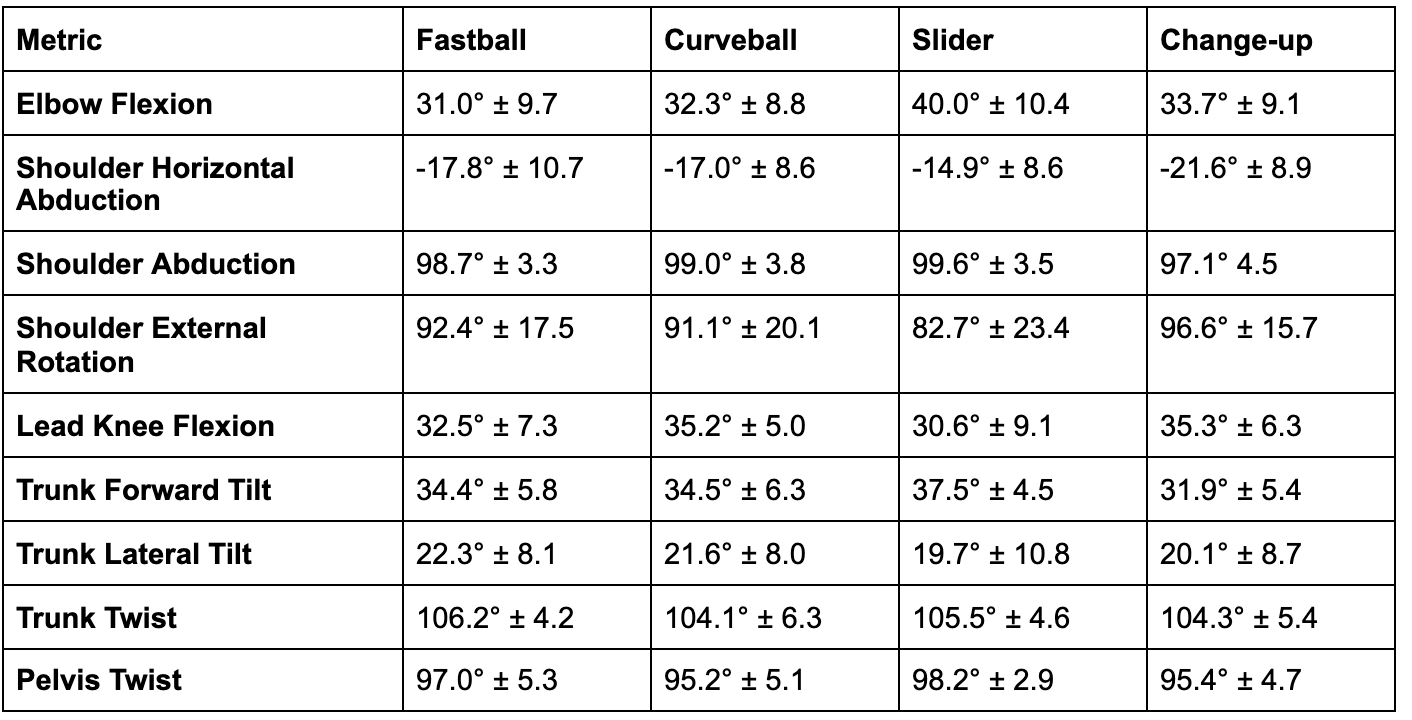 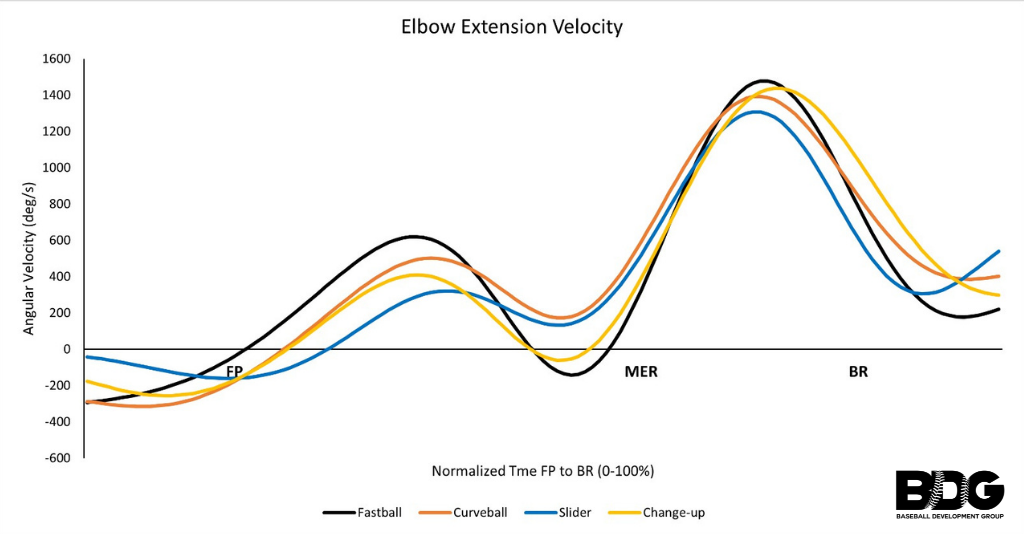 Shoulder internal rotation velocities were fairly similar between pitch types, however sliders were the fastest at 3659.94°/s, followed by curveballs at 3544.30°/s and fastballs at 3459.24°/s, with change-ups being slowest at 3287.69°/s. The timings between each peak were between 102% and 105% for all pitch types, with change-ups being the latest, and sliders and curveballs being the earliest. These differences may be explained by pitchers relying more on arm action to generate spin on sliders and curveballs, and to kill velocity on the change-up. Fastballs seem to be the outlier here as they are middle of the pack, however there are other kinematic differences with fastballs that may explain why the shoulder internal rotation velocities may be lower than the breaking pitches. 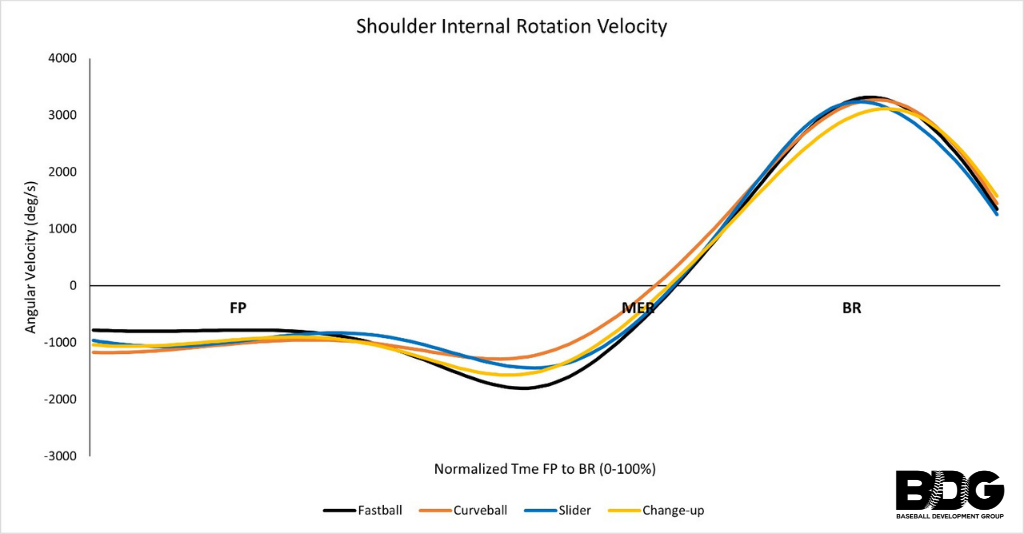 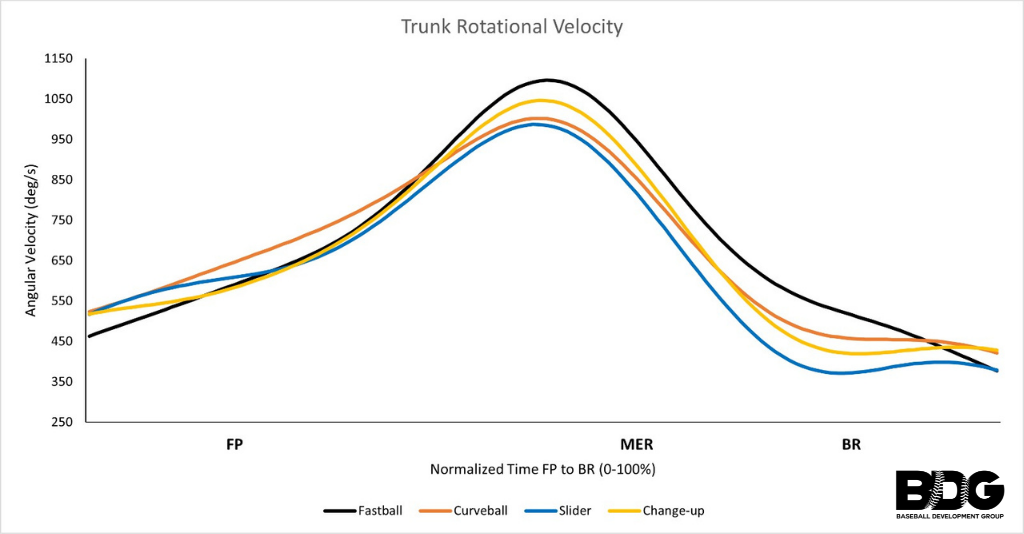 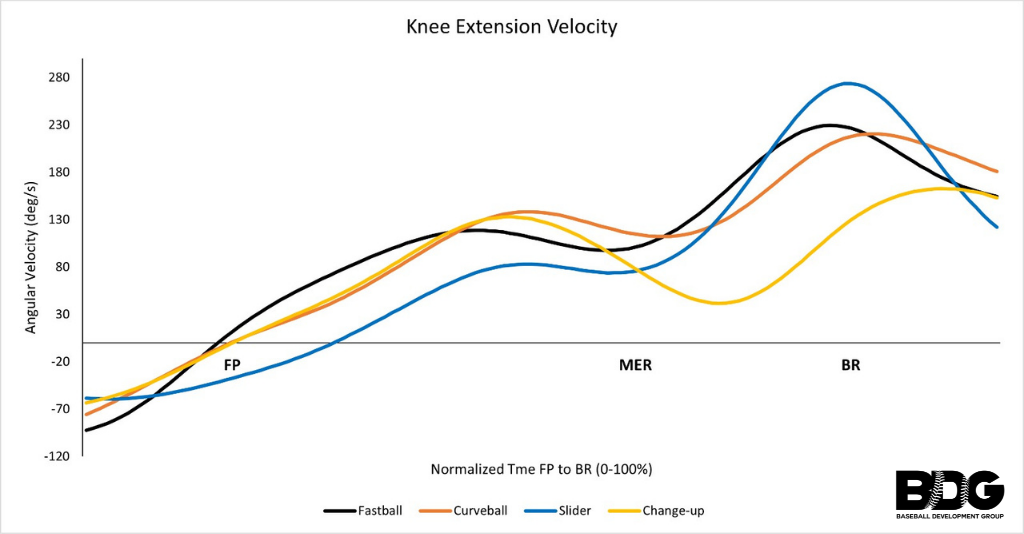 Time visible is a measure of deception, as it is the approximate time that the ball is visible to the hitter during the pitching delivery. Fastballs on average were visible for the least amount of time, followed by curveballs and change-ups, but sliders were visible for almost 10ms more during the delivery.

Elbow torque is a predictive model in this data processing, however we saw very similar trends to the literature where fastballs generated the highest elbow torque, then the offspeed pitches were all similar. These numbers are slightly higher than what is reported in the literature, however the trends are very similar.

For lead knee metrics, our findings had fastballs and curveballs landing with the most bent knee at around 46°, then change-ups at around 44°, and sliders the straightest at about 42°. At ball release we found fastballs to average around 32.5°, sliders around 30.5°, and curveballs and change-ups at 35°. Again our trends are similar to the literature with fastballs having the greatest range of motion and also straighter at release than change-ups and sliders, but sliders seemed to be an outlier again as they had been reported at a lead knee angle around 38° at release. Similar to what was stated in the previous blog post, the lead knee tended to be the most active for fastballs, indicating a likely better lead leg block, and better transfer of momentum through the body.

Although our trends were generally similar to what has been previously found, our magnitudes were slightly different, and our timing metrics were fundamentally different. Magnitude differences compared to literature may be due to skill level and velocity differences but may also be due to processing differences between studies. For timing metrics, PitchAi uses an algorithm to determine foot plant, which occurs slightly after initial foot contact. This causes our normalized timing to start later than the studies that use foot contact to initiate their normalization. This difference may explain some of the differences in pelvis timing, explaining why our values were much smaller than Escamilla et al., 2017. Our group was smaller with only five pitchers, and they were not entirely comfortable with throwing sliders, as one pitcher did not throw any sliders for this analysis. Potential other factors that may account for our differences compared to the literature are the tracking and processing of PitchAI. Segment definitions and joint angles and angular velocities may also be defined and calculated differently between our study and previous research.

Sliders were less studied in literature as there was only one study that included them, giving us less data to compare with. More research still needs to be done on sliders, especially accounting for hand position on the baseball and the effects on spin direction and pitch velocity. Sliders are also different from curveballs and change-ups as there tends to be more variability across slider spin profiles. Generally, curveballs tend to have a higher spin efficiency and as close to 6:00 spin direction as possible, and change-ups tend to have more spin efficiency than curveballs, but approach a 3:00 (for RHP) spin direction ideally. Sliders tend to have the lowest spin efficiency, as gyro sliders can have less than 10%, while a topspin and sidespin slider can be around 35%. The ideal spin direction for a RHP on each of these sliders is between 10:00 to 12:00.

In summary, our data from PitchAI was very comparable to the literature, however there were some differences in magnitudes and relative timings of joint angular velocities due to differences in data capture and processing. We found that change-ups were generally slower and more delayed with joint angular velocities, where curveballs and sliders were fastest and earliest, and fastballs were somewhere in the middle. This means that players are slowing down their mechanics for change-ups, but moving faster for the breaking pitches. This may be due to the lower and earlier trunk velocities seen in sliders and curveballs, which alters the mechanics to rely on arm action and arm speed for velocity and spin development. The trunk may be slower and earlier for the breaking pitches due to the mental mindset of a breaking pitch, with the goal movement profile breaking down and towards the gloveside which may be achieved by opening the trunk earlier. For future pitch design coaching, there may be coachable kinematic changes that can alter pitching mechanics to generate different pitch profiles, however this still needs to be investigated.