I should preface this by stating that I am neither a medical doctor, nor a pharmacist. The majority of this information came from dialogue with friends/colleagues in those respective fields, and my own literature review on the topic. I’m not recommending for or against the use of any prescription medications – that conversation belongs strictly with your own healthcare team.

Odds are, you’ve never heard of Isotretinoin before. But I guarantee that you’ve coached players who have taken it. In fact, I guarantee that you are currently coaching players who are taking it. And if I had to guess, I would say that 1 out of every 8-10 athletes from our High School and Collegiate programs has undergone at least one cycle before.

I’m talking about Isotretinoin, which you may know as Accutane, Sotret, or a long list of other names.

Here in Toronto, most of the athletes who take it call it Accutane. While they’re essentially all the same, it’s the brand name I’m used to hearing about, and is slightly easier to pronounce than Isotretinoin, so I’ll refer to it as Accutane from here-on out. 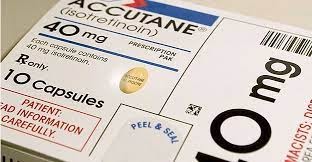 Accutane is prescribed for people with acne. Generally, it is prescribed for those with severe nodular acne, or those who have failed other forms of topical or antibiotic treatment. Though, it likely depends on your family doctor’s familiarity with the drug, and how much acne might be affecting one’s life from a psychosocial perspective. I can attest to the fact that some teenagers (who I wouldn’t necessarily think would be candidates based on their acne levels alone) are still recommended it.

Acne is debilitating on more than just a physiological level for most teenagers or young adults. There are very real social and psychological pressures to have healthy, acne free skin. Peers can judge, look down upon, and make fun of those who suffer from unwanted zits, pimples, and all other forms of blemishes. High school and college can be a terrifying experience for those who see themselves negatively due to their skin.

More and more messages are coming out every day promoting the “normalizing of acne”, which is fantastic to see, but the immense psychosocial pressures of having poor skin are still rampant in the halls and corridors. For most people who are fighting with themselves every day, Accutane presents itself as an absolute miracle drug. For many patients, it acts as a cure – and not just a temporary fix (Ellis & Krach, 2001). A quick google for “Accutane” reveals many before/after pictures of people who appear elated to have their outward complexion improved after a few months worth of treatment. 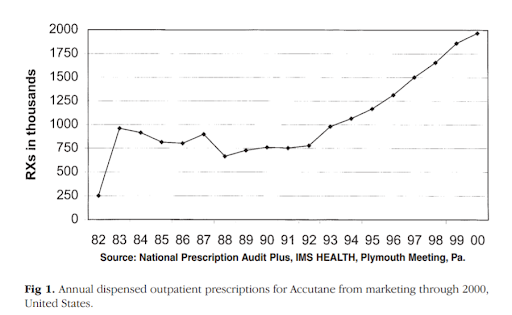 For these reasons, it’s prescription has been steadily increasing since it first hit the market 40-ish years ago. (*Though this image only covers until 2000, the prescription rate is still relatively high according to various sources*)

The drug is usually administered for a period of time (typically one cycle is 4 to 6 months) and then is withdrawn – yet often the beneficial effects continue indefinitely (Ellis & Krach, 2001). Recurrences of acne may occur in up to one quarter of patients, but the acne is equally responsive to repeat courses of therapy. Thus, acne can be treated effectively with Accutane without concerns about its chronic toxicity – which limits its use in other diseases (Ellis & Krach, 2001). It works by inducing a dramatic reduction in size and output of sebaceous glands (oily glands on your skin), essentially reversing the effect of androgens (sex hormones) on these structures (Ellis & Krach, 2001).

Although the benefits for many skin conditions are striking and exciting, the side effects and toxicities of oral retinoids require careful monitoring by experienced physicians. And there are a lot of side effects.

Despite most of them being benign and minor, the list of reported side-effects includes: dry lips, nosebleeds, tiredness, headaches, myalgias (body aches/ muscle pain), lower back pain, fatigue and lethargy, arthralgia (joint pain), joint stiffness, and many more (Brzezinkski et al., 2017). There are far more serious side effects in women, and there are strict rules that must be adhered to when pregnancy is a possibility. A growing body of evidence suggests that Accutane has teratogenic properties, though the extent of which is still being discovered. While the majority of the issues surround dryness of mucosal tissue of the eyes, lips, and face, there are myriad musculoskeletal side-effects too. And those are the ones I care most about relaying in this article.

Sure, nosebleeds, dry lips, and reddened skin are uncomfortable and annoying. But they are also not terribly likely to impact your ability to train at an elite level.

Back pain, muscle pain, joint pain, stiffness and soreness, headaches, systemic fatigue however, are far more likely to impact your players ability to perform at the same level as their teammates who are Accutane-free. 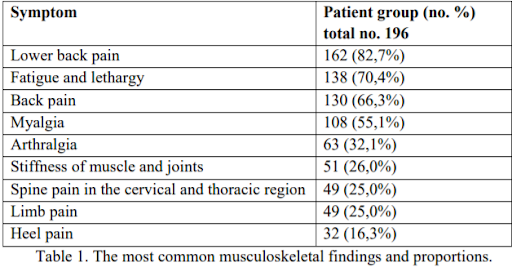 Further, Drozd et al. (2020) reported that almost 50% of respondents claimed that adverse effects persisted with variable intensity throughout the whole therapy. 15.4% experienced them even after termination of treatment. Only in 35.6% of responders, musculoskeletal symptoms lasted shorter, sometimes for less than one month or even less than 7 days – though that’s still a large percentage of people.

That means that some patients were experiencing symptoms for approximately one week, some the entirety of their 4-6 month cycle, and some even had lasting effects after they had finished.

The Drozd et al. (2020) paper continues to inform that because of these side effects almost half of the patients who responded were forced to limit or even stop all forms of physical activity. From a health perspective, that presents itself as a major issue. If you’re reading this blog, you are probably in tune with the notion that cardiorespiratory and resistance training exercises have many benefits. Some of those include:

The last point is particularly important. Exercise is really good at helping improve people’s pain levels. Accutane may cause some elevated pain in your joints and tissues, which may lead to activity reduction, which limits the positive pain perception aspect of exercise. In a sense it’s a negative feed-forward loop. That lends itself to the line of thought that some level of activity (through some mild discomfort and pain) is worth it. We should still have our athletes lifting, throwing, training throughout their prescribed course. Rest is not the answer, but modified activity might be.

Diving deeper, some of the research suggests that the increased muscle pain may be linked to elevated levels of local creatine kinase – a cytosolic enzyme for energy facilitation that acts as a cellular marker for muscle damage. Marson & Baldwin (2020) wrote an article recently investigating the “Creatine Kinase Conundrum”, wherein they discuss the tumultuous relationship between Accutane, creatine kinase, and rhabdomyolysis (severe muscular breakdown, cell leakage, subsequent widespread systemic issues, possible death). It’s an excellent article, and if this topic interests you, I highly recommend reading it in full.

In it, the authors report that up to 44% of individuals taking Accutane will experience elevated creatine kinase levels. There are a multitude of factors that can promote creatine kinase including: younger age, male sex, darker skin type, and prolonged, eccentric physical activity (Marson & Baldwin, 2020). Creatine kinase will rise to peak levels within 24–96 h post exercise and return to baseline within 4–10 days (half-life of approximately 1.5 days). Furthermore, while athletes may have elevated baselines, they have smaller increases in creatine kinase after exercise compared to untrained individuals (Marson & Baldwin, 2020).

The most prominent thought process believes that Accutane induces oxidative stress on the cells, which leads to creatine kinase inflation. Investigations into the symptomatic myopathy that is associated with Accutane suggest that it may alter both muscle tissue at a structural level as well as impulse conduction at the neuromuscular junction. Though scarce, current literature suggests that despite these noted structural changes, there is actually no connection between patients complaining of myalgias, and elevated creatine kinase levels (Marson & Baldwin, 2020).

Thus, to date there are currently no accepted guidelines for creatine kinase evaluation and management for patients on isotretinoin and, at least in the research available today, no firm evidence to suggest myalgias may serve as a reasonable clinical sentinel. Patients who fit the description mentioned previously (elite male athletes, darker skin, untrained individuals) may benefit from additional history taking and counseling about the more common risk factors for elevated creatine kinase (Marson & Baldwin, 2020).

This is something that should have been discussed with each player’s general practitioner (in fact, there is a specific prescription program in place to help identify at-risk individuals). Though it’s worth asking your athletes if they’ve had this discussion before or not.

What does this mean?