The Importance of Understanding Etiology and Study Design: A Look at the UCL and Balance

You see a biomechanical deficiency during a throw, and decide to fact-check your intuitions against some peer-reviewed data. You read someone’s post about the importance of eccentrics in a lifting program, and want to confirm that using a research article. There are several athletes buzzing around training, music is blasting, and you just want to get the gist of what the first paper listed suggests – what do you do? You read the abstract.

It’s okay. We all fall victim to it now and again. But today I want to highlight a specific paper, and cover one reason why just reading the abstract can create problems in knowledge translation. 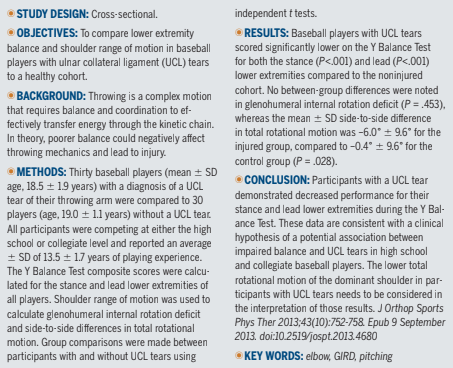 Here we can see the title and the abstract for the paper we are discussing today. At first glance, it certainly appears like they found a correlation between impaired balance and UCL tears when compared between matched individuals. The final sentence of the abstract mentions that “lower total rotational motion” needs to be considered, which serves as the only indicator that there may be more here than meets the eye. A closer look below, however, will uncover this in more detail.

Ulnar collateral ligament (UCL) tears are a common cause of medial elbow pain in overhead throwers (Hariri & Safran, 2010). As you may be aware, the UCL provides the greatest passive resistance to valgus forces during the throwing motion – the greatest of which occurs at the time point of maximal external rotation (MER). While the contraction of the elbow flexors/extensors and even wrist flexors/extensors are unconsciously contracted, they are still able to contract and are thus considered active resistance. I wrote about their involvement in a previous post, which you can read about here.

The etiology of UCL injuries is understandably multifactorial, however, two factors that have been suggested to play a role are reduced shoulder range of motion (ROM) and balance (Kibler & Sciascia, 2004). To date there have been many studies linking interactions between UCL injuries and reduced ROM; both the loss of internal rotation associated with gained internal rotation deficit (GIRD) and loss of total arc (internal and external ranges) (Garrison et al., 2012).

The proposed mechanism behind balance causing increased injury risk is that poor balance may predispose a pitcher to an inefficient energy transfer from the lower half to the upper half, thereby altering the stresses imposed on the body (and more specifically – to the medial elbow). Efficient timing and coordinated sequencing of joints is necessary to maximize ball velocity (Burkhart, Morgan, & Kibler, 2003). “Perfect sequencing” suggests that energy transfer moves from the rear-leg, to the lead-leg, through the pelvis and trunk, to the shoulder, the elbow, and finally the wrist and fingers. If this general sequence is poor, the resulting subpar motor patterns could lead to reduced velocity and increased injury risk.

Shoulder ROM is typically assessed in a supine position using a two-person approach (one to stabilize the scapula and rotate the joint, and a second to control a goniometer). The literature has been pretty consistent in this regard, and that is how it was measured in this study (Fig. 1). 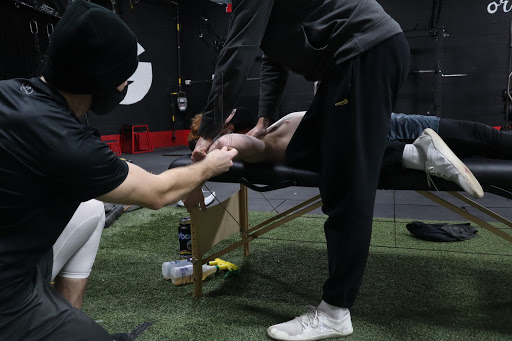 The impact of balance however, has been studied far less. The Y Balance Test has previously shown to be a reliable measure of assessing lower half ROM, strength, and neuromuscular control, and “somewhat” resembles the tandem stance seen at footplant, which makes it a good comparison (Fig. 2). 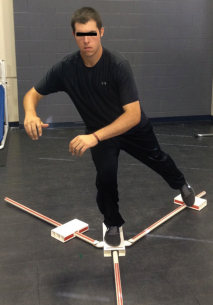 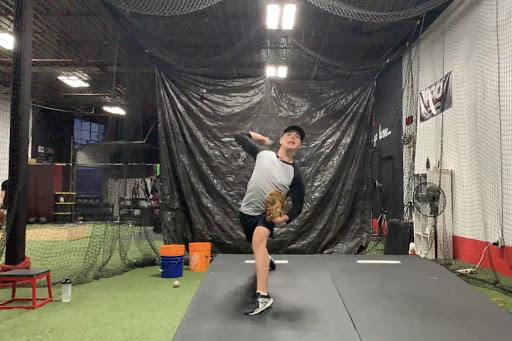 In this between groups cross-sectional study, the authors compared sixty players with a mean playing history of 13.5 ± 1.7 years. Players were divided into two groups (clinically diagnosed/ image confirmed and unconfirmed UCL tears) of thirty, age (19.0 ± 1.1 years), years of experience, arm dominance, level of play, and position matched participants; and were assessed for both shoulder ROM and bilateral limb balance using the aforementioned tests.

So what did they find?

The authors are quick to point out however, that despite the data suggesting that balance plays a significant role in UCL tears, we must consider the influence of this reduced total arc. In particular, the athletes in the UCL tear group demonstrated a 5.57° difference between throwing and glove arms, which meets the criteria for greater risk (>5° put forth by Wilk et al., 2011).

This is the major limitation listed in the study, and is the main topic I want to discuss in the remainder of this post. Due to the cross-sectional retrospective nature of this investigation, we do not know whether the changes in balance and ROM existed pre-UCL tears. While it is possible that they did, we have no way of knowing whether their balance findings are due to a detraining effect that would likely accompany a severe injury. While my recommendation as a therapist and strength coach would be to do as much as safely possible following any injury, I think it’s probably still a commonplace recommendation to “take it easy” and rest.

We might be left guessing as to their overall activity levels, but we know for certain that their throwing volume will have decreased – which could be partially responsible for the change in total arc (less throwing leads to less shoulder external rotation ROM). Having said that, because we did not have any baseline data on these pitchers, this connection cannot be made.

And for me, this issue is too big to reconcile.

Having said that, I think that if this study was repeated in a longitudinal study of similar athletes pre-season and we were able to track their ROM and Y Balance Test scores across a season, then this study becomes really interesting. Mind you, you would need to study a lot more than sixty players to find 30 UCL tear positive subjects. This is generally how research works, so we can’t be angry with the authors for designing their study like this. You would need to demonstrate some kind of connection between UCL tears and balance issues at any point in time prior to designing a more rigorous study. This was merely the first step in the process, though the way it’s reported in the abstract certainly can be misleading.

The Y Balance Test has been studied as a test for not only balance, but also neuromuscular control – measured through the distance a subject is able to reach their foot while maintaining balance on their stance leg. This neuromuscular control aspect is the most intriguing implication of this study, because I actually think that there is something valuable to be learned here. Neuromuscular control of the lead-leg during the throw is likely partially responsible for the ability to lead-leg block (if you believe that lead-leg blocking is important, that is), and start the transfer of energy up the kinetic chain. More neuromuscular control is always a good thing (I’d like to hear an argument against this) and I think it’s possible that there are both injury-preventative and performance implications.

To suggest that improper front foot bracing is responsible for increased stress on UCL’s still seems a bit too far of a stretch for me at this point in time. It seems too far down the kinetic chain to be culpable for the issues. From the data we have collected from PitchAI beta thus far, the biggest correlates with increased valgus torque are arm speed and positive horizontal abduction angle at ball release (think darting the ball), but we have not been able to identify any strong correlation between lead-leg metrics and torque.

We are still looking into these correlations as we gather more data. And as mentioned prior, I do think that there is benefit in training neuromuscular control of the lead-leg, and by extension the whole system. As our technological ability to measure elbow torque is becoming better and better, we are starting to make biomechanical connections that we previously did not have access to. For now, though, I think it’s safe to assume that lead-leg balance is likely unrelated to UCL injuries.

Here’s to figuring it out.