Joint Rotational Stiffness (JRS) in the Elbow: Welcome to the Gun Show

Here is Trevor Bauer discussing performing some eccentric bicep curls during an episode of his COVID-season vlog.

He describes them as “supermax eccentric bicep curls [to] train those decelerators”.

And I think he is on to something. (Kind of)

Let’s revisit this after I explain myself.

A combination of factors (including Trevor’s bicep curl clip) culminated in a conversation with one of my supervisors Dr. Mike Holmes (@HolmesLab on Twitter) about potential practical implications such exercises might have on joint rotational stiffness during the baseball throw.

Our conversation about joint stiffness also acted as a ‘sequel’ to my previous blog post (which you can read here) about the landmine hold test and the apparent link between grip endurance, forearm fatigue, UCL discomfort/pathology, and the benefits of endurance normalization.

In that post, I tried to connect the dots between improving forearm flexor-pronator strength and endurance and co-contraction about the elbow joint. Muscle contractions serve as a protective mechanism for the UCL, and helps absorb and disperse the medial elbow valgus torques that inevitably occur during the pitching motion.

As alluded to above, our discussion took that a step further by talking about joint rotational stiffness in the elbow. I now want to cover the contributions that the different muscles that cross the elbow joint have, and their implications for training. For this, I will be drawing from one of Mike’s thesis publications (which you can read here) titled:

First, let’s summarize some of the important background information from this paper.

We know that “the capacity of the musculoskeletal system to maintain joint stability is critical for successful human movement” (Holmes, 2013), which we are going to extend to the baseball pitching motion. We also know that inadequate joint stiffness can result in joint failure, which is important to remember when assessing for injury risk.

The paper continues to say that “the level of joint stiffness can be modulated through contributions from individual muscles, tendons, ligaments, cartilage and bone; and that passive tissues alone are generally not capable of maintaining joint stability” (Holmes, 2013).  This demonstrates that muscular contributions must play a significant role regarding joint stability – which is the grounds for which I based most of my argument from my previous post. The ligaments alone (passive tissues) are unable to withstand the normal forces needed for stability.

Remember, “a valgus moment at the elbow is countered by a varus moment that is primarily distributed among the muscle–tendon units crossing the medial side of the joint, the osseous articulation, and the UCL” (Buffi et al., 2015). In order to successfully distribute the forces, we need to counter with an adequate varus (opposite) load. This contraction ends up creating greater compressive forces on the bony structures of the elbow.

Back to the study.

The details of the biomechanical model and JRS formula can be found in the article.

I now want to draw your attention to this table that depicts individual muscle contributions to JRS about the elbow. 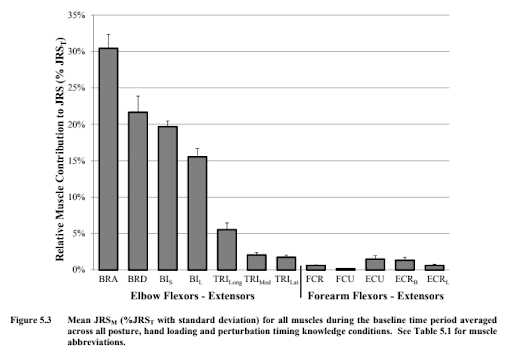 As you can see, the greatest contributors to elbow JRS are the brachialis, brachioradialis, short and long head of the biceps, and then the triceps. Together, the sum of all the measured forearm flexors/ extensors contribute only approximately 5% to the elbow stiffness.

Many of us are aware of the importance of increasing forearm muscle strength about the elbow, and the mechanism is viable; but as shown above the forearm muscles are heavily outweighed by the primary elbow flexors and extensors. They are bigger, have greater cross-sectional area, and have better leverage over the joint.

Now, there are a few caveats that need to be mentioned here when extrapolating this from the laboratory to baseball. One, this investigation was primarily concerned with sudden perturbations (that is, the subjects did not know when the movement was going to happen), which is different from a baseball pitch. Two, the primary target of this investigation was elbow joint flexion/extension loading, whereas we are most concerned with elbow valgus loading. Same joint, but a change in the direction of the applied forces should modify the relative leverage of the muscles that we are interested in. That does not mean they are useless (quite the contrary), but it does warrant contemplating their role during a medial perturbation/load.

That brings us to the next piece of the puzzle, where I want to highlight a second paper (which you can read here) by Buffi et al., called:

The goal of this study was to “develop a musculoskeletal modeling approach to enable evaluation of muscle–tendon contributions to mitigating elbow injury risk in pitching” (Buffi et al., 2015). They created a forward dynamic simulation framework that used a scaled biomechanical model to simulate the pitching motion of a generic high school pitcher (Buffi et al., 2015).

This *essentially* ran a simulation of what might actually happen if we tweaked Mike’s study while applying some similar variables.

They found that the subject’s motion imposed the largest valgus moments during the arm cocking and acceleration phases of the motion, which we know is approximately at the maximal external rotation (MER) time point. That isn’t surprising. 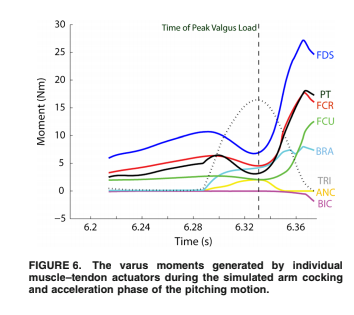 What is surprising are the muscle(s) that peaked around the same time that elbow valgus loads peaked.

As shown in the figure above, “the three compartments of the triceps made the largest contribution to the net varus moment at this critical time point” (Buffi et al., 2015). Flexor-pronator muscles did not peak until after elbow valgus loads had peaked.

So, just like the previous study, it is not a forearm muscle that is playing the biggest role during stabilization. It is the primary elbow extensor that has the greatest varus force contribution. Just like before, a muscle that is larger, greater cross-sectional area, and greater leverage is handling more of the heavy lifting.

Does this make sense?

Well, at this particular time (MER) “the subject’s elbow was flexing, and therefore the triceps compartments were contracting eccentrically, compared to the flexor–pronator muscles, which were contracting concentrically” (Buffi et al., 2015).

We know based on hundreds of studies that eccentric loading demands more force than concentric loading. I don’t need to cite anything here or list the various reasons we could utilize eccentrics –  I am confident that you, dear reader, are familiar with this.

That is to say, the greatest stabilizers of the elbow are effectively your bi’s and tri’s.

Why are we not paying more attention to this?

Well, some of us are, remember? 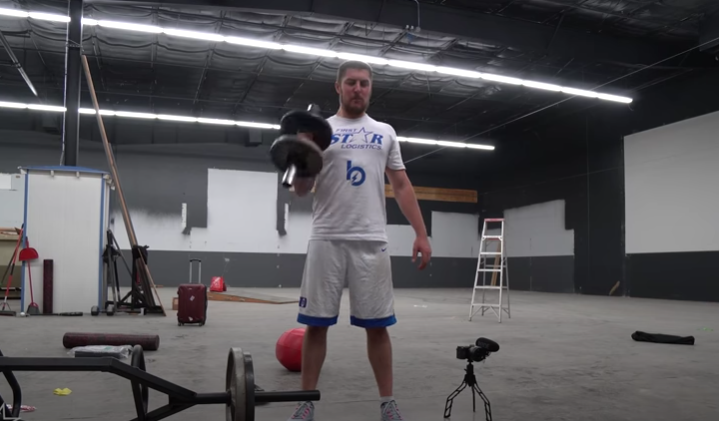 If we want to improve contraction about the elbow joint stabilizers (that act as a protective mechanism for the UCL), then training our primary elbow flexors and extensors (brachialis, brachioradialis, biceps short/long, triceps) is the best option.

And, to take this one step further, since we know that eccentric loads require greater muscle forces, then we should definitely be training these same muscles eccentrically. Many people do include upper body eccentrics in their programming (we commonly use eccentric DB bench/pushup/pullup exercises), but they do not focus much effort on pure eccentric elbow flexion/extension exercises.

Further, certain exercises (like a hammer curl, a screenshot of which you can see Trevor demonstrate above), simultaneously train your grip strength. The same can be said for several other variations of curls, skullcrushers, or hang exercises. We could even add “fat gripz” to most of these exercises, which force your forearm muscles into contracting at greater lengths than usual.

Theoretically then, having massive/strong arms is a great way to help protect your UCL.

I’m not saying it’s the cure for UCL injuries, but I think you would have a really hard time suggesting that weaker elbow flexors and extensors are going to be more beneficial in protecting your medial elbow.

Somewhere along the line, baseball pitchers were told to stop doing bicep curls, and tricep pushdowns regularly in their workouts. Pitchers were made fun of for finishing their workouts with a “gun-run”, or wanting big arms.

I’m here to tell you, that makes absolutely zero sense.