Here’s this latest edition of Keeping up with Baseball Research (7/18/2018). I’ve been spending a great deal of time looking into command, motor learning, and trying to build a model for how it all fits together. This is obviously a long term project, but something that is of interest to me at the moment.

The following are just a few studies to get you thinking about some of the fascinating concepts relating to commanding a strike zone. Enjoy!

Dr. Jonathan Freeston, who works with the Cleveland Indians, has done some interesting research looking at how throwing speed affects accuracy in baseball players – as highlighted twice in this post!

The first one here, investigates the speed-accuracy trade off (SATO) in two different studies.

SATO, essentially posits that accuracy in throwing is optimized at a certain percentage of maximum velocity. In other words, as you reach peak velocity, there is likely a trade-off between MPH and hitting a target. Prior to this study, the research on SATO had shown that percentage to be approximately 75% of maximal throwing speed (MTS).

These two studies by Freeston and Rooney were created to look at this SATO effect in baseball & cricket players.

Players were asked to throw at a specified intensity level towards a target (a cricket stump in study 1, a target just above the ground in study 2), in order to identify whether there was a SATO and at percentage of max velocity that occurred.

The authors provided two potential contributing factors to the fact that there is a certain speed where accuracy is optimized – higher throwing speeds creating increases in lateral trunk tilt and a reduced launch window.

What is a launch window? Glad you asked!

The goal of this particular study was to quantify the SATO and launch window during a throwing task at two different speeds under non-constrained conditions. Most of the previous research was done with constrained conditions – seated or standing without moving feet. The errors in accuracy in these studies were attributed to two main factors:

Of the two, release errors were shown to be more detrimental to accuracy.

The study took a look at accuracy and the launch window for two conditions, throwing 80% and 100% MTS. Here are some of the findings.

We know that pitchers are going to miss spots (especially when they’re trying to throw max effort!). With every motor action there will be motor error, even more so in a ridiculously difficult movement task like pitching. With each movement, there is what’s called a ‘probabilistic structure’ to these errors, in that there is a shape to it. Knowing this structure, and putting it into the context of pitching, is what the authors decided to look at.

Think about a batter’s hot zone. If a player is weak ‘down and away’, we’d probably want to attack it. 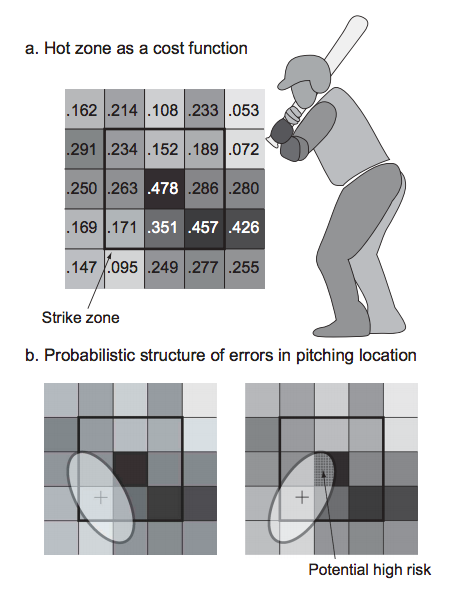 Consider two pitchers facing the same batter, both trying to execute a down and away fastball. Even if they had the same error size in execution, the shape of the error could be a significant factor in their outcome. If you’re ‘error shape’ includes missing over the heart of the plate, that’s a problem.

This begs the question – what determines probabilistic structure of throwing error?

The goal of the study was to investigate the differences in two-dimensional probabilistic structure of errors in pitching location for the different combinations of pitchers; overhand, submarine, side-arm, handedness. 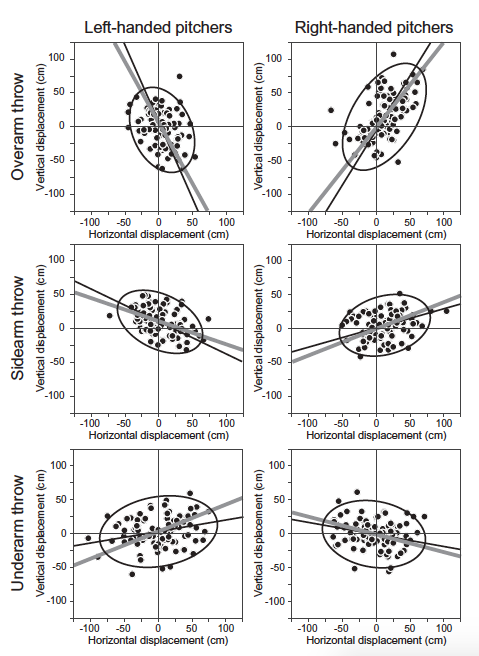 Interestingly, the authors found an ellipsoidal pitch distribution as seen above. What this means is that the error from the target was not random (a circle) but followed a pattern with long and short axes. The angle of error, moreover, was identical to the angle of arm trajectory. Look at the side-arm versus the overarm ellipse shapes.

This ellipsoidal pattern is interesting, as it has potential implications (if backed further by future investigations) for pitch selection or strategy.

“Research has put more time into investigating velocity than control, and therefore a pitcher who can throw at high velocity is more easily identified than a pitcher with exceptional control.”

What did they find?

Not so shockingly, pitch location (PL) results demonstrated that “professional pitchers have better control in all three evaluation methods.”

Pitch location was distributed in roughly ellipse-like shapes as previously seen in the research (Shinya 2017). The lengths of major and minor axes are related to variability of release timing of the pitch and release point in space, as was shown in previous research by (Shinya 2017).

“Professional pitchers were shown to have remarkable abilities to control the PL, particularly in the lateral direction”. In other words, this study showed that professional pitchers out performed their high school counterparts in controlling for the horizontal plane.

“Notably, the mean position of PL in breaking balls was approximately 30cm lower than in fastballs” – even though they were asked to throw the ball at the catcher’s mitt. This begs a few interesting questions to think about.

Are pitchers conditioned to throw curveballs down in the zone, meaning that even though they are ‘concentrating’ on hitting the mitt, there’s an automaticity of the task being ‘throw it down in the zone.’?

When a pitcher is asked to throw a curveball at the mitt, is the task ‘achieve an end-point of the ball’ with a specific pitch, or is it ‘throw the ball at the mitt, and let the break do it’s work?’

The utility of this information, to be honest, is something that I am still considering. At this time, I think that more work needs to be done before we can make definitive statements like right handed throwers are better off trying to throw down and in to a righty, because they are more likely to miss out of the zone. Though the idea seems nice!

More likely, I need to do some more research on command / control patterns, break / movement per pitch, and how it can fit together with this information. If anyone has more information on this, or wants to guide me down a rabbit hole, I’m all ears!!!