In this edition of the Baseball Research Review we review a 2016 study that looked at predictors of Ulnar Collateral Ligament reconstruction in MLB pitchers. Whiteside et al. scoured the available PITCH/fx data from 2010-2015 in an attempt to identify risk factors & predict UCL injuries. The study provides more insight into the Tommy John epidemic and introduces more points of discussion on how we may be missing the boat.

Background:
Despite being a four time All-Star and playing in three World Series, Tommy John has become a household name for all of the wrong reasons. Since the first UCL reconstructive surgery performed on Tommy John in 1974, the game has seen an upsetting trend. As we pointed out in a recent Baseball Research Review the number of UCL surgeries have spiked in the last decade, sending the entire community into a frenzy to find a solution. 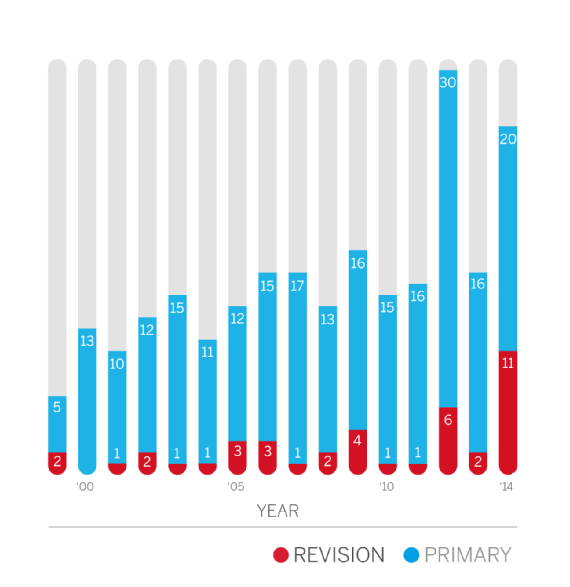 Sports medicine research has allocated much attention towards this problem, pointing to a number of potential factors including pitch count, innings pitched per season, fatigue, pitch velocity, mechanics and even the climate of where a player grew up. All of these variables have been implicated and attempts to address them have been made. But as Conte 2016 established in his recent paper — we are still trending upwards!

Are we missing something?

The purpose of this study was to identify significant predictors of ulnar collateral ligament reconstruction in MLB pitchers.

To do this, the authors collected data on every UCL reconstruction at the MLB level (113 total) since the beginning of the 2010 season. For a pitcher to be included, they had to have thrown 10 MLB innings in the preceding 12 months prior to surgery. 104 pitchers fit this criteria and composed the study cohort.

MATLAB was used to generate algorithms to fetch data on these players for date of birth, height & mass, innings pitched, fielding independent pitching [FIP] and days in between consecutive games played (all taken from Fangraphs). A second code was used to create a control group to match their UCL torn peers. Finally, the authors created another code to harvest PITCH/fx ball tracking data.

Out of all the information collected by the authors, 14 specific variables were analyzed in the study. 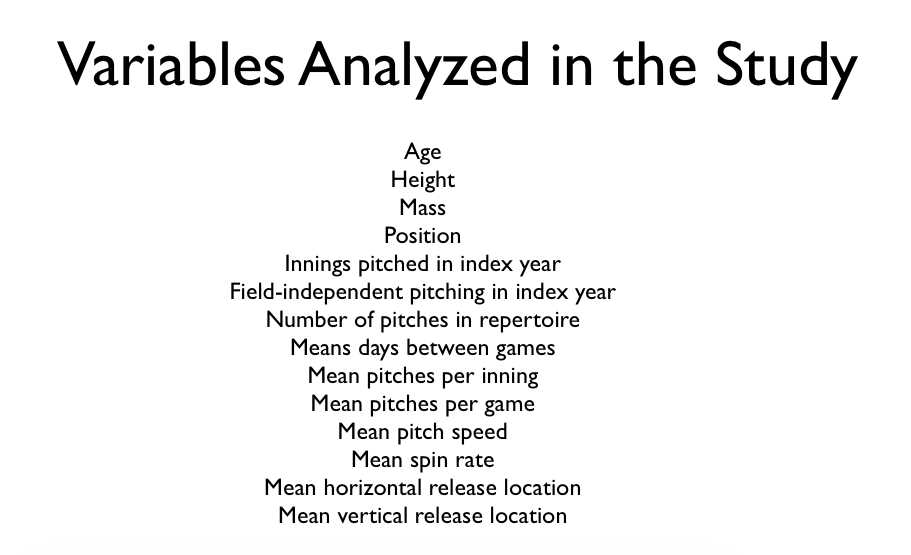 The authors then calculated the magnitude of the relationship between these variables and suffering from UCL injury using a binary regression model.

*A separate component of the study, in which the authors used these variables to train 2 machine learning models, was performed. However, we will not get into the specifics.

The authors found that fewer days between consecutive games, fewer pitch types in their repertoire, more pitches per game, greater pitch speed, a less pronounced horizontal release location and a smaller stature all increased the likelihood of Tommy John surgery. Combined, these factors explained 19.9% of the variance between the groups.

In Baseball Research Review #3, we investigated a study by the same group of authors that attempted to explain a pitcher’s success. Using a similar methodology, they investigated a number of parameters, like movement and speed, that could be attributed to positive performance.

After a thorough analysis of the data, they concluded that ball speed, release point consistency, the ability to change speeds, and a lower (i.e., a more horizontal) arm slot were all significant predictors of pitching success. Having said, these factors could still only explain 24% of the variance in a pitchers FIP. Articulated in another way, 76% of a pitcher’s FIP was not explained!

Our major takeaway from that study, and this new one by Whiteside et al, is that most performance and injury related questions do not possess an easy answer.

It’s boring and cliche but usually “it depends.”

When only ~20% of the variance in UCL reconstruction is explained by six variables, it would be silly to demonize one factor in isolation. Sensationalizing comments like “he’s throwing harder this year and better be careful because his elbow might explode” are ridiculous.

If you read the entire study, the authors actually do a tremendous job of acknowledging the limitations of their findings & logically unravelling potential takeaways. Another reason why it’s critical to read the entire paper and not the abstract.

The current study only appraised public databases, precluding the inclusion of other factors that relate to injuries (eg. medical records, practice workloads, kinematics and kinetics, and playing history).

Moreover, within each variable studied there are glaring holes and limitations. For example, it was equated that 12-19% more time in between outings was afforded to the controls. But does time away really represent a break from physiological stress?

As noted by the authors practice loads couldn’t be included. Maybe one pitcher threw more than the other in between outings. Maybe that pitcher had a higher chronic workload and his extra throwing didn’t even register as stress.

Regardless of the holes, there was one factor in particular that caught our eye — the size of the pitcher’s repertoire. The learning machines created in the study indicated that the odds of reconstruction decreased by 33% for each unique pitch type possessed by the pitcher. The authors suggested that by having more pitches, and therefore more mechanical difference from pitch to pitch, repetitive tissue stress may be avoided.

This is an interesting finding and sparks a few ideas in our heads.

As always, these are just my thoughts and comments, concerns and discussion is greatly encouraged. No one has the answer!!

If you like what you’ve read, and you’d like to receive updates about future instalments of the Baseball Research Review, be sure to sign up for our newsletter using the form below.