Can Your Athlete’s Joints Do What You Are Asking Them to Do?

When analyzing lower body mechanics, pitching coaches (and hitting coaches, for that matter) tend to pay a lot of attention to the hips. (Note: If we’re being picky, what they are actually referring to is the pelvis. I’ll explain this subtle, but important difference in a couple paragraphs from now.)

Do the hips “get open”? How and when does the pitcher initiate that rotation? Can the pitcher “create” separation between his hips and his torso?

These are all valid concerns!

But, I have found that, in teaching rotation, coaches often neglect a key quality that ultimately dictates a pitcher’s ability to achieve effective lower body mechanics. What coaches seldom consider is how a pitcher’s femurs move relative to their respective acetabulums (see the GIF below), and how this relationship can affect the overall pitching delivery.

To get to the heart of this issue, we need a brief lesson in hip anatomy:

When most coaches talk about “the hips” — particularly “hip” rotation — they are actually referring to the pelvis. Differentiating hip rotation from pelvic rotation may seem like a matter of semantics (okay, who cares?), but I promise you this is an important distinction. Hip rotation and pelvic rotation are in fact very different, and, as you will see, insufficient hip rotation can become a significant detractor to efficient pelvic kinematics.

The femoroacetabular joint (the “hip” joint) is a “ball-and-socket” articulation composed of two bony surfaces: (1) the femoral head (the “ball”), and (2) the acetabulum (the “socket”; see picture below). As with any articulation, relative motion between the composite parts is an indication of joint health. That is, a healthy hip is one in which the femoral head (the “ball”) moves well through an appropriate range of motion relative to the acetabulum (the “socket”), and vice versa. 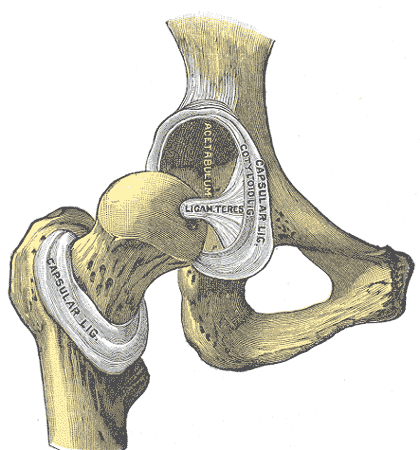 So how does this play out in the pitching delivery?

If you look closely at the pitcher in the video below, you may be able to detect a couple of things happening in his lower half as he goes through his stride phase that many pitching coaches would probably agree are suboptimal for this particular athlete. (Let’s ignore the arm and what happens with the stride leg through deceleration for now).

First, we see an early — what some coaches might consider a “premature” — rotation of the pelvis. Second, we see an extremely short/truncated stride. What may be less obvious is the lack of internal rotation (towards home plate) of the rear/drive leg — it doesn’t seem very “engaged”. (Can you see it?)

So, what’s going on here?

Is this a timing issue? A mechanical tweak that needs to be made? Could it be a mobility restriction?

Upon assessing him on the table, it became abundantly clear to me that the mechanical issues in his lower half stemmed from both a lack of adequate range of motion in both hips, as well as poor dissociation between hips. 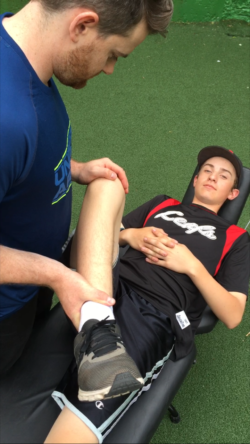 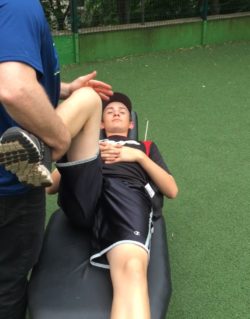 As you can see in the pictures above, he had very limited — if not non-existent — femoroacetabular internal and external rotation range of motion (often a sign of a tight hip capsule, but that’s an article for another time).

But, what is equally important in this case, is the lack of dissociation (independent movement) between his left and right hip, which you can appreciate in the video below. Watch as I take his lead/stride leg to max abduction, and then add external rotation (which is essentially the same thing that’s happening during the stride phase of his pitching delivery, just passively).

The rotational motion of his right hip joint is coupled to the motion of his left hip joint. What we would like to see in this case is independent motion — the rear/drive side pelvis should rotate without the femur moving (at least as much as it is currently).

Simply put, his hip joint wasn’t behaving the way a hip joint should — especially if you want to deliver a baseball with elite velocity and command, and in the most energy efficient way possible.

Now, we could cue the athlete to “stay closed”, or we could incorporate a drill, or modify the task slightly to encourage more hip separation. But, none of these manipulations would have been very effective, as long as his hips couldn’t get into the positions that we were asking them to get into. And, that is because…

No amount of technical cuing is ever going to fix a structural limitation.

(This is important! Stuart McMillan touched on this concept here.)

In this case, the pitcher in the video above does not demonstrate the ability to independently internally rotate his rear/drive side femur relative to his pelvis. Rather, his hip acts as if the femur and the acetabulum are coupled. When one moves, the other does too. They are essentially “glued” together. As a result, the right pelvis has no choice but to rotate as soon as he begins internally rotating the femur on his rear/drive leg, and his momentum transitions forward sooner than is (probably) desired.

Now, if you look at the lead/stride leg, you can see that, again, there is little dissociation of the femur from the pelvis itself. As the pitcher approaches landing and begins externally rotating his femur relative to his acetabulum, the entire hip complex moves together, as one unit. Rotation of the pelvis, again, begins prematurely.

The lack of independence between the femur and the pelvis on both the drive leg and the landing leg contributes to a considerable biomechanical inefficiency, poor energy transfer, and, ultimately, a tonne of potential velocity left on the table!

Want to see an incredible example of the kind of dissociation we’re looking for in the lower half? Watch how long Chapman’s pelvis stays “closed” while his lead leg externally rotates, and his drive leg internally rotates. It’s very impressive.

This is just another example of why athletes need to be able to dissociate articulations, and why joint preparation is such a big part of our approach to treating, preparing, and managing the baseball athlete, regardless of age or training status.

Take-Home Message: You can’t out-cue or out-drill a structural limitation. Whatever your technical model of pitching (or hitting) may be, ask yourself:

Can my athlete’s joints do what I am asking them to do?